The booth gives you everything you need – Interview with Danny Watts, musician and voice over artist 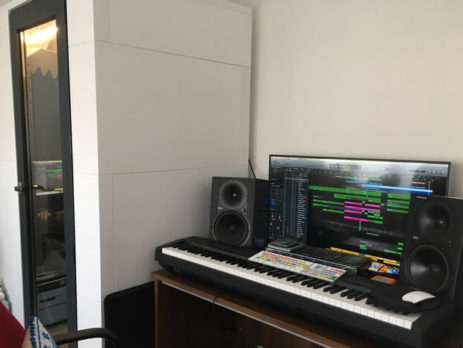 In 2016 Danny Watts, voice over actor, composer, sound technician and recording artist realised that he needed a recording space of his own and, as he had moved to a new house, he could have one at home.

The first challenge was that the space set aside for recording backed on to an airing cupboard that housed the boiler. Not so great for a recording environment. Nevertheless, after some research he found Studiobricks online and spoke with Carla Croft and Alice Dagger from the Black Cat Music & Acoustics team and went to view a booth at the company’s Tonbridge warehouse in Kent.

Danny decided that the Studiobricks booth was what he needed and purchased one for home delivery and personal set up.

We recently caught up with Danny whose CV is extensive across multiple fields. Danny started playing guitar at the age of 11 and started singing by accident when he stepped in to fill in when the lead singer dropped out of his college band and thus started his vocal love affair. Completing his training with studies in sound engineering and post-production he then worked at Silk Sound on Wardour Street and Mayfair Recording studios in Primrose Hill. Danny also had his own composition studio working with 19 Management and had his work shortlisted for artists such as Blue and Nike. 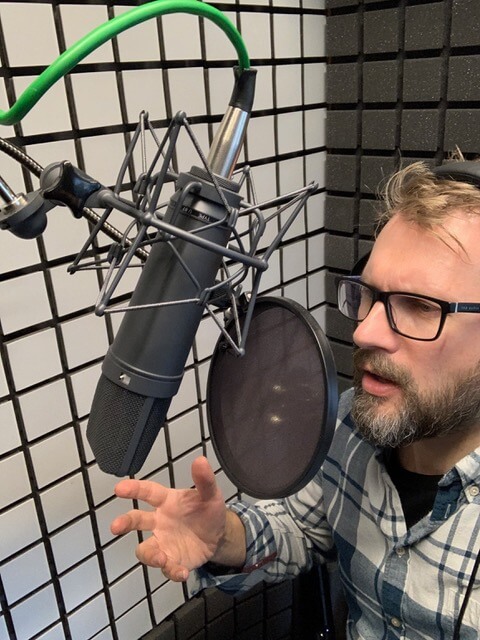 Whilst working at Silk Sound he had his first exposure to the world of VO. A family friend suggested to possibly audition for voice over work as they thought he had a good phone voice. From this, he produced his first demo which he sent out to different companies and agents.  Within no time at all, Danny was signed to a London voice agent and landed his first voiceover job with Ravensburger before becoming the voice of Drambuie.

Today Danny has built a portfolio of corporate clients that often bring repeat business but music still plays an important part in his life and his home set up proved to be as useful for recording his new album as it is for his voice over work.

What model booth do you own: I own a Studiobricks One Plus booth double wall system.

What set up do you have inside your booth: I have a 20 year old Neumann U87 condenser microphone that I took from my old London studio which I use for VO recordings and singing as it has a nice warm sound and works well with the resonance of my voice. I also use a Sennheiser MHK-416 Shotgun microphone which I find gives a much more open and very natural sound and finally I use an AKG C414 to record guitar and ukulele.  I also run Logic Pro X via a monitor inside the booth with a Mac Mini in the main part of the studio.

How did you find the recording performance within the booth: I found the booth gives you everything you need. Myself and my children perform and record our professional work in the booth and send directly to clients. Collectively, the work recorded in the booth comprises of corporate, e-learning, promotional and video gaming.

You released your album Legacy by Downtown Partriots which was partially recorded in your Studiobricks booth. How did you find it changed your recording ability: Well, I was able to record at any time the house was free. My wife went on a business trip for a month and I just worked solidly on the album at any time I could around voicing. I could pop in to the booth at night when inspiration took and so a majority of the vocals were recorded at night. You have to be strategic and realise that having one at home means you have to work around family interruptions, but I am very happy to have one at home, it was definitely worth the investment. 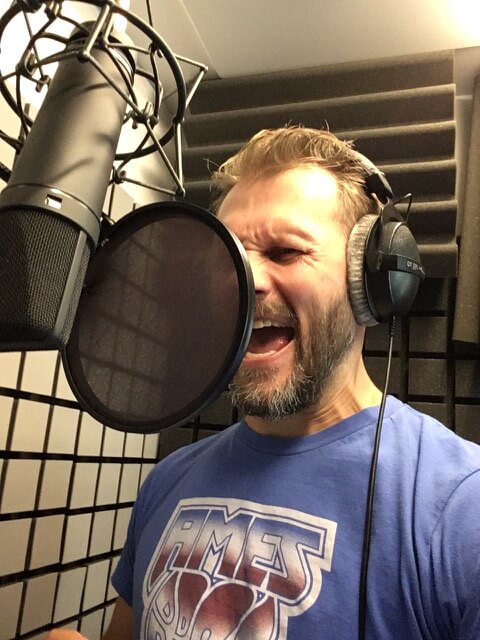 What inspired your album: Legacy was a 4-year project in the making, although some of the songs were written back in 2012, and it was heavily influenced by the likes of Led Zeppelin and 90’s grunge. I wanted to make sure the finished album was completed to a high quality, so I didn’t want to rush it.

How did you finish the album: Out of the 13 tracks recorded, only 12 made it on to the album. The tracks were mixed in Florida by Blake Eiseman of Bink Sound and mastered in Atlanta by Colin Leonard at SING Mastering. I took my time to polish the tracks to create a completed concept and sound running through the whole album.

Would you do anything differently:  Well, I would like to have a slightly larger booth!  It’s a little tight for space when playing or recording an acoustic guitar so I would go for a slightly larger size. Plus I would like to be able to be in the booth with my daughters when they work as I have to keep on going in and out.  But that’s more to do with my set-up rather than the booth itself.

Did you find that the recording quality differed between vocal and instruments: The booth gave me everything I need and I’m happy with the result.

Black Cat Music & Acoustics are the sole UK distributor for Studiobricks and also offer acoustic consultancy and design and install a wide range of treatments for studios and performance spaces. For further information call +44 (0)1892 619719