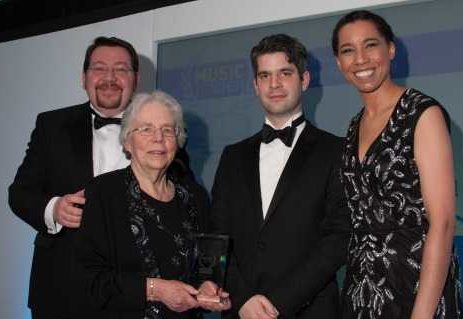 Christine Crowshaw and Vivienne Price were the joint winners of the Music Teacher Lifetime Achievement Awards, sponsored by Black Cat Music and MusicPracticeRooms.com .

The winners of the 2014 Music Teacher Awards for Excellence were announced at a prestigious ceremony attended by 190 guests from across the music education industry, on the evening of 7 February 2014 . The ceremony took place in the Barbican’s Garden Room & Conservatory.

Described by her students as a ‘magical musician who is always ready with the right words’. An outstanding performer and master practitioner of neurolinguistic programming, Christine Croshaw is known for her total commitment to helping others build the technical tools and mental strength to flourish as musicians.

Vivienne Price’s legacy is plain to see and hear – in its 35-year history, the National Children’s Orchestra has been a beacon of aspiration, benefitting thousands of children, including.many of today’s top performers. Her tireless tutelage continues to pay dividends in concert halls across the country and abroad, and her achievement in founding the organisation and ensuring it’s continued growth cannot be underestimated.

Group Marketing manager for the sponsoring companies, Black Cat Music and MusicPracticeRooms.com, said.” We are delighted to once again be supporting the Lifetime Achievement Award and give our congratulations to Christine and Vivienne for the effort, enthusiasm and expertise they have brought to music education.”