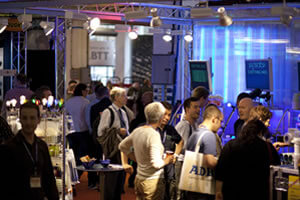 Members of the Black Cat Music team are out and about meeting clients and suppliers associated with the theatrical side of the business.

It was first stop London, the home of professional theatre, with a visit to the ABTT Theatre Show. The 2013 event, which took place last week had a theme emphasising that everything to do with technical theatre remains at the heart of the Association of British Theatre Technicians annual show. The show offered a ‘one-stop shop’ of theatrical services and resources by bringing in an even broader range of backstage and production suppliers and service providers than in previous years as well as a seminar programme.

This week it is off to Berlin for Showtech, for Black Cat Music for an event described by the organisers as the “world forum for the stage”. It is held every two years and this year is being billed as the “International Trade Show and Conference for Theatre, Film and Events.” Showtech 2013 will be held in Halls 1 to 4 of the Berlin Exhibition Centre from 18 to 20 June.

General Manager, Teresa Rogers, said, “The London show provided a great opportunity to network with many of our valued customers in technical theatre. We now look forward to meeting their counterparts in Germany at Showtech.”