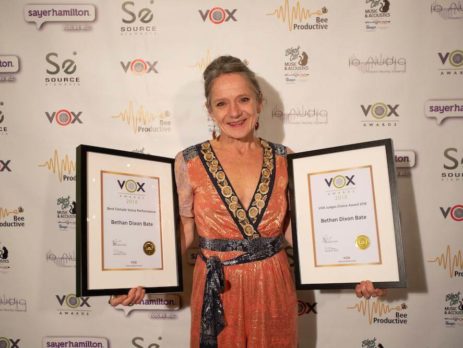 Black Cat Music & Acoustics’ Chloe Prince had the pleasure of chatting with the multi award winning voice-over artist Bethan Dixon Bate, winner of Best Female Voice Performance and Vox Judges Choice Award 2018 for her voicing of I am Steiermark for Steiermark tourism. You can hear her award winning performance here.

In her career she has worked with well-known brands such as Big Finish/Dr Who, Warhammer, Total War: Rome II, Silent Hill, Fred Olsen Cruises, Hurst by Robin Crumby to name but a few.

Tell me a little bit about your career.

I was an actor for 10 years however I developed a bit of stage fright which started to hinder my performances. Then about 6 years ago I was about to give up on the profession, I went to a school reunion and met an old friend who was a successful film producer. She said that I should give voice-over a try, so I decided to give it a go. I met with Damn Good Voices who were at the time running a VO demo reel service and they were also starting up as an agency, so I managed to get an agent straight away. I started working on pay to play and it went from there. This was a wonderful opportunity for me as it allowed me to perform without the audience, so I had no stage fright.

What was your previous at home recording set up?

I had an SE acoustic filter and SE Microphone with three large bi-folding acoustic screens and an acoustic cloud over the top encapsulating me whilst I worked which gave a nice recording environment. However, I live in a flat that backs on to the playground of a school so I couldn’t work if the children were in the playground as you would hear it in the background of the recording which wasn’t ideal.

When did you upgrade to your Studiobricks Booth and how easy was the installation?

I collected and installed my Studiobricks booth in March 2018. I had help from a very handy friend who is amazing and helped me install the booth. We found it very easy.

How did you find the Black Cat Support and customer service?

It was fantastic. Justin (Bird, Black Cat Sales & Marketing Executive) was always available to talk to and he answered all my questions quickly. I wanted to self-collect so he went the extra mile by taking everything out of the shipping crate and bubble wrapping each individual brick so that it could fit in my van.